John Frederick Lewis (1804-1876) was one the leading British Orientalist painters from the middle of the C19th. He began his career as a watercolourist, painting portraits, animal paintings, hunting and fishing scenes and landscapes around the British Isles. His elaborate but painterly realism was in the English tradition. He trained in the family workshop rather than the academy.

A journey to Spain 1832-3 turned Lewis on to the subject of Orientalism. Spain, with its heritage of Arab occupation and Moorish architecture, was seen as an amalgam of Oriental and Occidental. It provided a safe glimpse of Islamic-influenced culture without the dangers of Islam for European travellers. At that time the bandit (along with the Gypsy) offered artists and writers a chance to embody the rebellious romantic archetype of the outsider living by private tribal loyalty and ancient codes of solidarity in the face of norms of social conventions.

In 1837 Lewis left England for the Mediterranean, travelling through Italy, Greece and Albania to reach Constantinople. He stayed there, painting Ottoman subjects, along with other artists, including David Wilkie. He later moved to Cairo. Llewellyn recounts the success of the watercolour The Hhareem [sic] (1850) when exhibited in London. It played on the fascination with the Arab slave trade, which exerted a powerful moral repugnance mixed with sadistic attraction over European viewers. The subject of the painting was an Ethiopian woman. French author Achille Constant Théodore Émile Prisse d’Avennes reports that Lewis had a friend buy the slave in order to allow him access to her as a model but the model had a strong aversion to Lewis. This may or may not be true but Llewellyn suspects Prisse’s account to be at least biased. In England his reputation was spread by the picturesque anecdotes of William Makepeace Thackery. 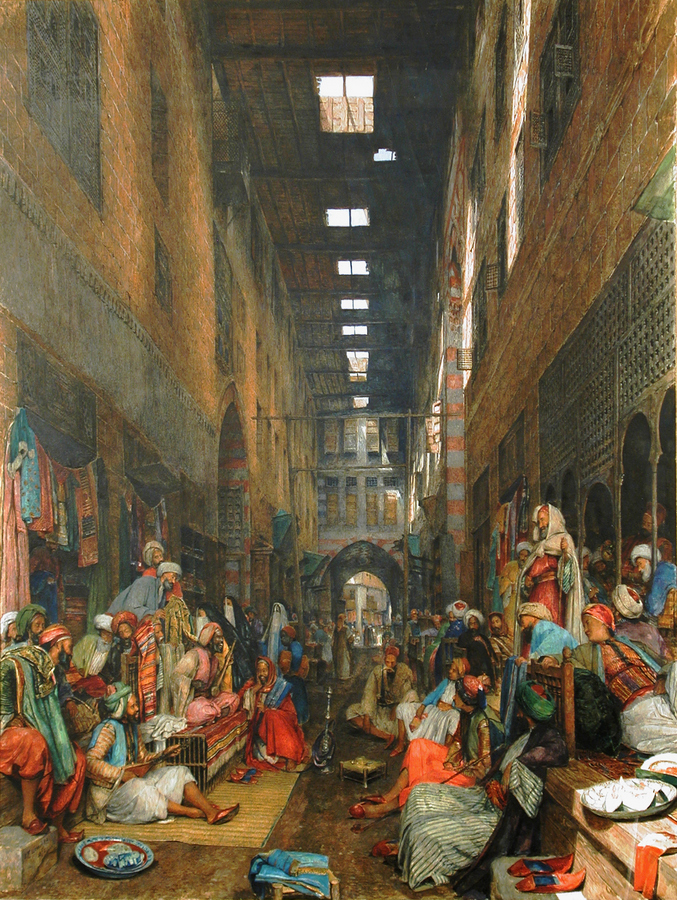 He returned to England with his new bride Marian in 1851. Thereafter he spent his career creating images of the Near East, especially Egypt, using his sketches, memories and costumes and props in his studio. (Some of his Eastern garments were down through inheritance and survive today.) Upon his return to England, Lewis resigned from the Society of Painters in Water Colours (of which he had been a member since 1829), which is seen as a tactical decision, because no artist was permitted to become elected a member of the Royal Academy whilst also being a member of any other professional association. He was elected ARA in 1859 and elected RA in 1865. Despite his high profile and the many honours bestowed him, he was a private man – even described as reclusive. He disliked his duties and proved a poor teacher during the stipulated attendances as visiting tutor at the academy schools. Lewis preferred to remain in Walton-on-Thames (from 1854 until his death), Surrey rather than spend much time in London not dictated by his duties.

Lewis used himself as a model for Oriental men, his visage and beard looking suitable for the roles. There are photographs of him in Eastern costume. This was partly symbolic and partly a practical consideration. Llewellyn points out that artists modelling themselves as Arabs was commonplace and that sometimes this fact was known to viewers. In Lewis’s case this is unclear and she did not find contemporary references to the artist being recognised by the general viewers within his paintings. Marian posed for some of the European wives within harem scenes. Llewellyn wisely does not become caught up on “cultural appropriation” and other such anachronistic retrospective views and instead talks about the then-current conventions. However, the use of “Orient”, “Oriental”, “Eastern”, “Arab” and so forth in quotation marks nearly throughout in discussions of the Victorian reception of Lewis’s art is an unnecessary concession to political fashion. Readers are informed enough to recognise that the historical conceptualisation of these terms is culturally freighted and thus not necessarily accurate. Such ostentatious authorial signalling is irksome and mars Llewellyn’s informative, clear and otherwise well judged text.

Typical scenes included views of bazaars, grand interiors, hareems, wall gardens, schools, courtyards and other recognisably Oriental settings. The figures are prominent and accurately painted, with attention paid to mood and expression. Some paintings are of single figures, with the setting reduced to background details. Other paintings are what could be described as interiors with figures. This exhibition contained pages from Lewis’s early sketchbooks, his pre-travel watercolour scenes of Britain, art made in Egypt and oil paintings executed back in England for exhibition. These are loaned from various collections. Also exhibited but not illustrated or transcribed in the catalogue are letters relating to Lewis. The catalogue makes a good introduction to one of Britain’s most celebrated Orientalists.

To view my art and books visit www.alexanderadams.art