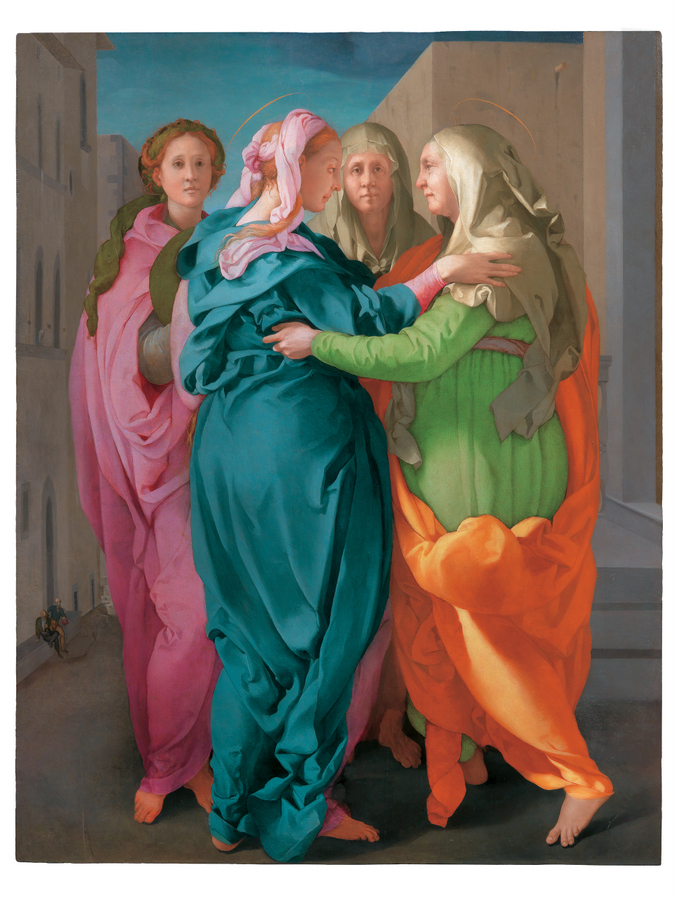 Jacopo da Pontormo (1494-1557) was considered one of the leading painters of the Late Renaissance period in Florence. We define the Late Renaissance of Italy as commencing with the death of Raphael in 1520. It is his unfinished painting of the Transfiguration (1520; completed posthumously) which marked a move away from the combination of idealism and verisimilitude – typical of the High Renaissance – towards Mannerism, which is characterised by reduced realism and study from life, greater artificiality, more anatomical distortion in the service of emotional extremity and to display the artist’s originality, increased levels of strangeness and cultivation of the novel for its own sake.

Miraculous Encounters: Pontormo from Drawing to Painting (7 September 2018-6 January 2019, Morgan Library, New York; touring to J. Paul Getty Museum, 5 February-28 April 2019; previously at the Uffizi, Florence) is an exhibition which brings together some of Pontormo’s best paintings Visitation, Portrait of a Halbardier and Portrait of a Young Man in a Red Cap. All of these works are approximately located in the period 1528-30, a period of turmoil in Florentine history. From 1529-30 the city was besieged by forces intent on overthrowing the Florentine Republic, which they did in 1530 and installed Alessandro de’ Medici (r. 1531-7) as ruler of the city. During this time, able-bodied Florentine men were under arms defending the city, perhaps a reason why a number of Pontormo’s male portraits of that era show the subject with weapons.

The centrepiece of the exhibition is the newly restored is Visitation (c. 1528-9), loaned from Pieve dei Santi Michele e Francesco, Florence. The painting shows the encounter between the Virgin Mary and her cousin Saint Elizabeth on the streets of Florence. They are watched by two female spiritual attendants. What is striking about the painting is the simplicity of the clothing, the clarity of the colour and the gentle rhyming of forms. The faces of the attendants echo each other; the cousins mirror each other. The cousins interlock their arms. There is essentially nothing in the picture other than this group of figures. While the drapery is realistically rendered, there is no sense that this is a scene taken from life: the colours are simplified, the setting rudimentary, the perspective is inaccurate. The faces of the two cousins are wonderfully vivid and tendered depicted. The attendants are more ciphers, less substantial in presence and appearance.

It seems that Pontormo set his painting beside a prison building in Florence. There may be symbolism to that. There is – perhaps more plausibly – a more pragmatic reason for the choice of that building: it has no windows and decorative detail visible from the position he chose and was thus an easy building to paint.

A preparatory chalk drawing has come from the Uffizi. It is squared and scans of the painting reveal a grid. So Pontormo used a grid to transfer his design rather than a cartoon. Both were common methods of the time. Vasari (who rather negative about Pontormo and his pupil Agnolo Bronzino (1503-72)) suggested that Pontormo was greatly influenced by Dürer’s prints. His engraving Four Naked Women (1497), a print that was known to have circulated in Italy by the time Pontormo painted Visitation. We know that Pontormo used Dürer’s print designs for a series of frescoes (now lost), so it is a possibility.

Two fine portraits of young gentlemen are of subjects who remain unidentified. Texts in the catalogue set out the suggestions of the identities of the paintings. Bronzino was a worthy successor to Pontormo as a portraitist. The exhibition and catalogue shed light on the collaborations and borrowings between master and pupil. For example, there is Pygmalion (c. 1530), which was designed by Pontormo but executed by Bronzino. Illustrated in the catalogue is a nude study by Pontormo that Bronzino used in his painting.

Exhibited is Martyrdom of Saint Acacius and the Ten Thousand (1529-30), Bronzino’s variation of his master’s painting of the same period, which was derived from a design Pontormo had made for a commission of 1521-2. The idea of originality and plagiarism was a complex one. During this period the transmission of figures, details and layouts through pattern books – shared by master and pupils and later passed down to other painters – as an example of the artisan creator in the manual arts, was being supplemented by the jealous guarding of prerogative of the artist as creator in the liberal arts, where artists began to guard their intellectual property. Dürer went to Venice (in part) to curb the activity of a copyist using his designs and Michelangelo was furious that his unfinished Sistine Ceiling was seen by Raphael, who incorporated Michelangelo’s innovations into his own frescoes. Yet shortly after Michelangelo made designs specifically for Sebastiano del Piombo to paint in competition with Raphael. Artists could be generous or stingy towards artists outside of their workshop.

There is a long essay on the Visitation and shorter essays on its restoration history and discoveries of new technical analyses. The results of visual analysis allow us to understand that creation process, showing underpainting and underdrawing. Restoration data is given in the information for the paintings. We shall see if this takes off in future catalogues. Such information is often kept confidential, not least due to some terribly destructive restorations. The footnotes are of heroic extensiveness and will be a mine for future researchers. For even an average reader, such long and thorough notes are an absorbing diversion. The catalogue illustrates the paintings and drawings and there is an index and bibliography. This book will be of value to anyone wanting to understand the Late Renaissance in Florence, Mannerism and the careers of Pontormo and Bronzino.

View my art and books at www.alexanderadams.art