Katsushika Hokusai (1760-1849) is the most famous figure in Japanese art. He worked in the medium of colour-woodblock printing. Best known for his landscapes, he found fame in Japan for his published manga in 1815-9. Posthumously, he achieved legendary status in Europe and proved very influential among the Impressionists and Post-Impressionists.

Hokusai’s Landscapes collects the best of Hokusai’s landscapes. Author Sarah E. Thompson (curator of Japanese art, Museum of Fine Art, Boston) makes an informed guide to Hokusai’s art and its reception. The print impressions illustrated are those in the MFA collection. Generally, these are good quality and in reasonable condition.

Prints of the ukiyo-e generally did not focus upon landscape, as many were urban or domestic in character. They featured prominently in pilgrimage pictures. Hokusai’s innovation was to produce art in the style of ukiyo-e but take these scenes out of the rooms and streets of Edo. He integrated figures into his landscape prints for their narrative function, to indicate scale and to provide animation, relief and so forth.

Hokusai designed his prints during the heyday of ukiyo-e colour prints. Print designers drew their designs on paper that was pasted to blocks, subsequently cut away by a specialist cutter, destroying the drawing and leaving the design on the block. Other blocks for colour were added, as indicated by the designer. The specialisation of designer, cutter, printer, papermaker and publisher/seller made high production of colour printmaking a viable business, something that never developed widely in Europe. (The closest European artists came to this is the chiaroscuro woodcut.)

Hokusai produced his landscape prints over a short period (1830-6). It is thought that Hokusai retired from print designing in 1836 due to an economic crash, which depressed the market for prints made for the merchant class. He subsequently devoted himself to painting, working for wealthy patrons, although he apparently ended his days in straitened circumstances.

The introduction of cobalt/Prussian blue expanded the palette available to Japanese artists. Previous blue pigments were smalt (dull, liable to discolour), indigo (not a true blue, liable to fading) and ultramarine (brilliant but expensive) and other imperfect alternatives. Access to a strong, affordable and non-fugitive blue made landscape prints (with their expanses of sky and sea) a new area for previously urban ukiyo-e prints.

View of sea and mountains are suffused with graduated Prussian blue. Aspects of everyday life are woven into many landscapes. Work, leisure, farming, fishing, eating, pilgrimage, travel and play are all set in the varied landscape around Mount Fuji. In one print a roof is being tiled by roofers in the foreground, mist shrouds the town below; above the mist a kite is flying. In another scene, a fisherman stands on the apex of an arcing coastal rock; he grips leashes of trained cormorants which are submerged in tumultuous waves. The shape of rock, man and leashes echoes the contours of Mount Fuji. There is the iconic composition of travellers on a path through a marsh caught by a gust of wind. This features the motif of figures with their heads completely concealed by circular hats, one commonly used by Hokusai. 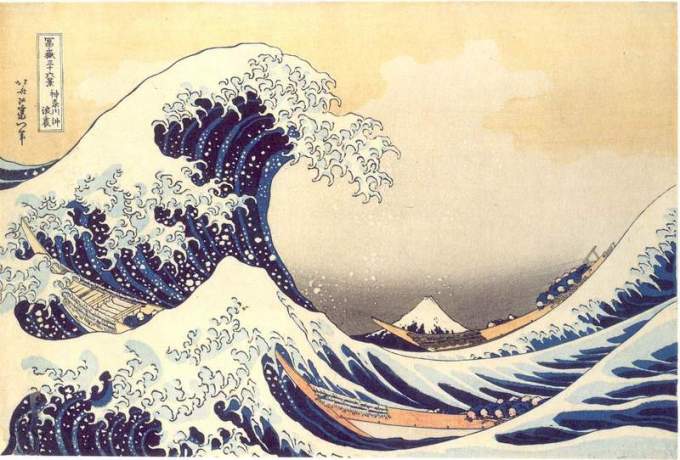 The Great Wave is included. It has prompted numerous interpretations, not least that of mortality of man. Three versions of Fine Wind, Clear Weather (showing Mount Fuji in profile) are reproduced. Each is differently coloured, showing the inventive inking of printers.

Falling Mist Waterfall at Mount Kurokami in Shimotsuke Province is the epitome of Hokusai’s ability to synthesise Japanese and Western styles and abstraction in depictions based on observation. The artificial pattern of the parabolas of falling water satisfies our aesthetic requirements and yet does not contravene our understanding of nature. Even more daring is Amida Falls in the Far Reaches of the Kiso Road, in which the waterfall descends from a near-complete circular aperture. Hokusai used pure geometric forms, along with curvilinear line and strong diagonal axes. The print is influenced by the Rinpa style, with its stylised depiction of flowing water.

The depictions of bridges have become archetypes of Japanese architecture within nature. The print of poet Li Bai (Li Po) gazing into a waterfall has the falling water as a curtain of parallel vertical abstract bands. 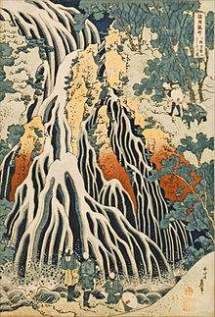 Thompson outlines putative influence upon Hokusai of art by Maruyama Ōkyo (1733-1795) and Shiba Kōkan (1747-1818), both artists who adopted aspects of Western art (respectively, colour and tonal complexity in non-linear forms and one-point perspective). What made Hokusai so appealing to European artists was – paradoxically – his Western-inflected version of Kano School art, which his European admirers found so quintessentially Japanese. Japan Bridge in Edo combines Western one-point perspective with Japanese aerial perspective.

A long essay surveying Hokusai’s landscapes is followed by large illustrations with brief informative captions. The printing, paper quality and two-colour cloth binding are good. Overall, Hokusai’s Landscapes makes an excellent introduction to one of the great artists

To view my art and books visit www.alexanderadams.art