The catalogue of a current exhibition (MCA, Denver, 20 September 2019-5 April 2020) includes early material from the short life of photographer Francesca Woodman (1958-1981). Portrait of a Reputation was the title of Woodman’s first photographic book, which had no text except the title.  Her choice of the title Portrait of a Reputation for a booklet made at a point when she was beginning her career and completely unknown is indicative of Woodman’s self-consciousness, awareness of art history and her huge ambition. The photographs and writings of this exhibition and publication mostly come from the time when Woodman began photographing herself at 13 up to her departure for New York. The photographs were taken in Denver, Colorado, Andover, Massachusetts and Providence, where Woodman studied (alongside Lange) at Rhode Island School of Art and Design (1975-8). This review is from the catalogue.

Some of this material is unfamiliar to followers of Woodman’s art. Some of it is unique and belongs to George Lange, a friend of Woodman’s youth. Some of the vintage prints (some poorly printed and uncropped) are Woodman’s first prints of images that have since become classics, given away in a flush of excitement and pride. There are teasing and affectionate letters from her to him. Also included are letters from within the Woodman family.

Lange preserved material by, and about, Woodman. That material is exposed in this new book and it provides glimpses of Woodman as a young woman, just emerging as an independent artist. Woodman was unusually precocious. Cultivated by her artist parents and steeped in Italian classical literature, Roman culture and contemporary Italian art, Woodman grew into art as a young teenager, taking her first self-portraits at 13. In one of her earliest photographs, Woodman took the opportunity of encountering dense exposed roots of a large mature tree to pose emerging from (or entangled with) the roots. Woodman was schooled in the classics and would have known Ovid’s Metamorphoses, many of which dealt with the transformation of people into animals and plants

There was a photo session at a cemetery involving friends. Woodman wore a semi-transparent dress and later undressed for photographs next to graves. The symbolism of the graveyard is too intrusive and obvious for the series to be effective but it seems a necessary experiment. An invitation card for an exhibition by Woodman has a photograph of her lying, seen from above, a common Woodman trope of the weightless woman. Profile 2 is titled by the artist in the margin and is one of the most memorable photographs in the exhibition. (Few of the individual photographs are titled or titled and the catalogue does not provide definitive labels for art works.) 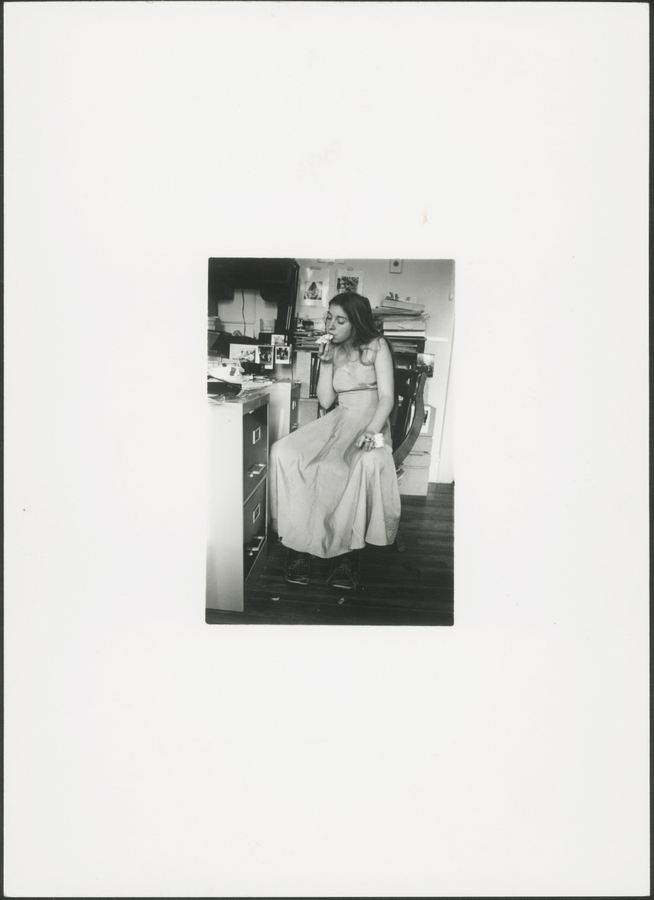 Contact sheets are reproduced, with selected shots illustrated full page. There are shots that are fluffed – Woodman fails to strike a suitable pose, she smiles as she cannot get in position, she moves during an exposure, a shot is not suitably composed and so forth. These are the side-products of any photo session. There are also shots that are blurred and double-exposures that did not seem to Woodman suitable for selection. The material includes letters, postcards and notes by the artist. There is no transcript of the texts. While there is great value in facsimile reproduction – not least a degree of intimacy and a greater order of information – the absence of transcript will leave some readers straining to decipher Woodman’s handwriting.

In her essay Nora Burnett Abrams dwells upon the issue of seriality and instability of Woodman’s photographs; this seems to overlook Woodman’s conventionality: her desire to make great and powerful single photographs. One can consider her efforts in the context of East Coast American art of the late 1970s, namely conceptualism, land art, performance and interventions within existing environments. These referent contexts are certainly not invalid and unproductive as points of departure, but their selection by commentators today is most definitely in opposition to idea Woodman may have been driven to create powerful single images (with or without handwritten marginal texts) that encapsulate the artist’s skill, ideas and vision.

There is a misstep in discussions of gender in relation to Woodman’s photography. Abbot writes that “[…] Woodman does not make her body available for the easy consumption by a (male) gaze.” The first, primary and most important viewer of Woodman’s photographs was Woodman herself. She was the envisager, creator, model, editor and curator of her art. The gaze is primarily her own. Her art was made to satisfy her own gaze. Her own judgment was the ultimate test of suitability that would determine choices about her art. The consumption of her art was by men and women. It is often women who are far more critical, cruel and proscriptive about images of the female body than men are. Woodman’s art, so influenced by stories which intertwine myths of men, women, gods, monsters and animals, is poorly served by such pedestrian commentary.

Drew Sawyer’s essay outlines the material and influences Woodman was exposed to during her education at RISD and the material of photography that was published by editor Max Kozloff in Artforum, who was also a Woodman-family friend. Sawyer points out that a contemporary interest in Man Ray’s photographs may have led Woodman to paraphrase the image of Meret Oppenheim at the printer’s press in her own photograph of herself with a hand outline painted across her chest. Lady Hawarden and Duane Michals’s are also referenced.

Exhibited are photographs of Woodman by Lange. Lange visited Woodman’s apartment-cum-studio in New York and took photographs of her at work in the studio and relaxing. We see her at work in her studio, setting up props and testing poses. Another significant aspect of the photographs of Woodman out shopping is that they show Woodman in her own time. So much of Woodman’s Gothic, Victorian and anachronistic props and clothing serve to distance her from the life of her era. Encountering her wearing Chinese style coat in a Chinese good store is to see her outside of her curated setting.

The photographs of her by Lange show Woodman reflective and playful, though not guileless. A skilled and thoughtful artist, so self-conscious and self-crafted, is never guileless. The photographs of her beside her mother and friends are more intimate than her self-taken nudes. This is the artist as a woman off-guard, reacting to stimuli, sharing a joke, trying to amuse a friend or engaged in a dialogue. Her acting capacity – functioning as auteur, both director and actor – is suspended whilst she is out of her zone of absolute control. The portrait shots of Woodman against a white wall are beautiful.

It is strange to think of an iconic presence such as Woodman appearing so unguardedly and in new ways after so many years of us being familiar with a set group of her photographs. It makes it seem as though she is still alive somewhere, producing material and experimenting with her image and her art. These provisional attempts, failed shots and discarded art – along with images of her life – make Woodman peculiarly rematerialized (returned to ordinary actuality) and dematerialised (alive but absent). We see her interacting with friends, colleagues and models (categories that overlap to wide degree). Encountering the deeper (or broader) truth of Woodman’s life pushes us to confront the biographical fact that a young woman died at the age of 22. We are confronted by echoes of life cut short, one which could still be continuing today, with Woodman as the doyenne of women photographers who take themselves as their subject. 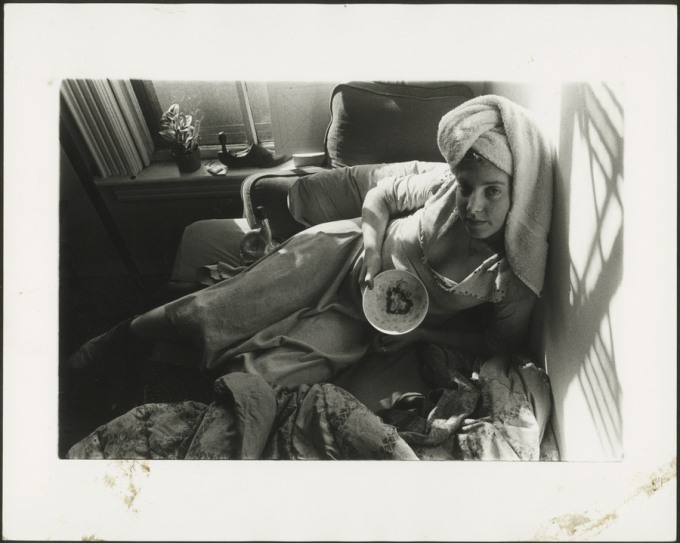 Seeing this material – “new” material, as it were – awakens the pain of loss. The old wound makes itself known again because to be cognisant and admire the art of Woodman implies the acknowledgement of her premature death and curtailment of her artistic potential and her future life. Even without an explicitly biographical interpretation of Woodman’s photographs, the fact of her death adjusts our art historical response. She was a young woman when made this art; she was a young woman when she died; she had no opportunity to extend, revise, curate and revisit the art we know. We have no memoirs, interviews, few notes, few letters, no extended commentary by the artist upon her art. We will never have any. She had no chance to respond to the fame and acclaim her art would achieve posthumously.

However firmly we may attempt to separate the biographical from the artistic when assessing art, it is understandable that the admiration of many for the photographs of Francesca Woodman must be tempered by grief.

To see my art and books visit www.alexanderadams.art