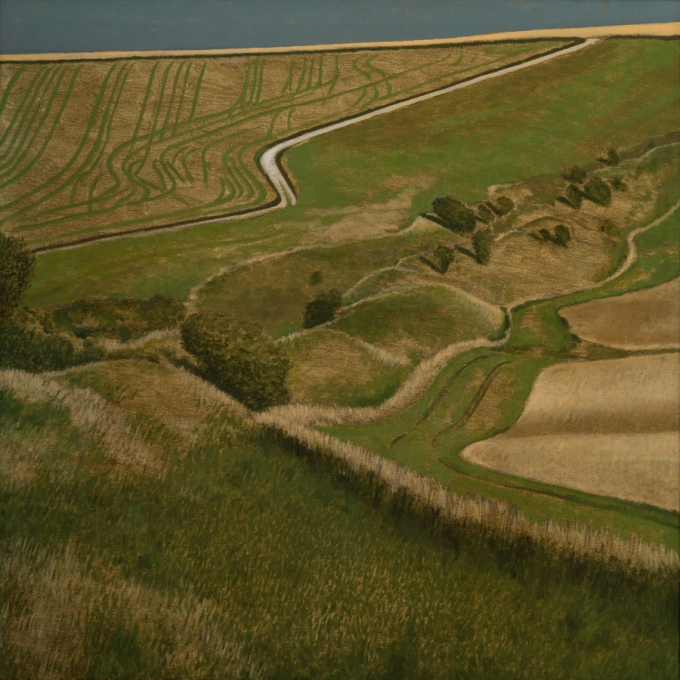 The current London exhibition of David Inshaw (b. 1943) (Redfern Gallery, London, 9 October-29 November 2019) brings together 35 oil paintings, 3 large drawings and a suite of new etchings. Much of the imagery is familiar but there are some new departures. Most of the paintings are of Inshaw’s native Wiltshire and West Country (including Berkshire) and dwell on the downs, farmland, copses and Stone Age earthworks of the region. His Wiltshire Monument (2018) is a statement of intent. It combines disparate motifs from the landscape combined in an artificial yet plausible manner, juxtaposing features prehistorical and C19th with a bonfire, oblongs of baled hay and a patchwork of fields under a sharp blue sky. It is well chosen as the cover for the catalogue (Andrew Lambirth, Redfern Gallery, 2019, £10). Silbury Hill appears in several compositions. Paul Nash’s influence is apparent in the handling of motifs such as barrows, copses and views of downs at sunset, but not intrusively so. 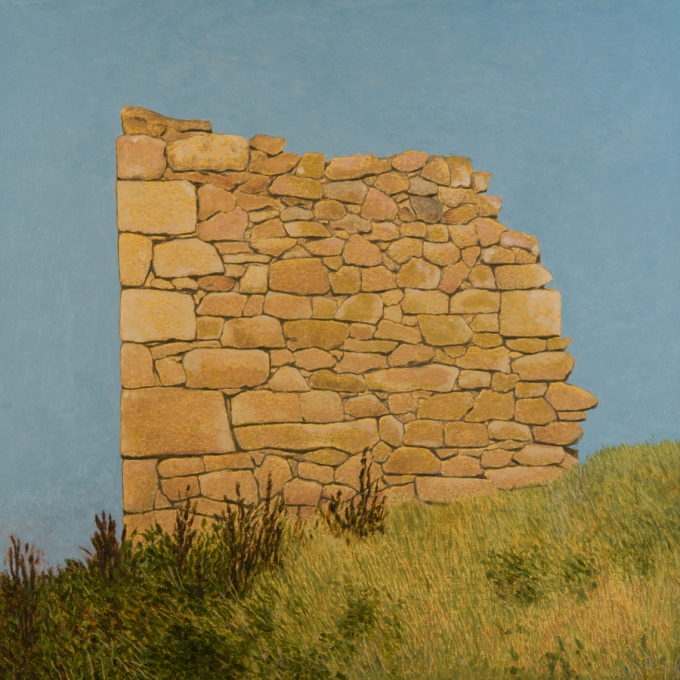 Engine House, Botallack (2018) is a beautiful essay in tonal modulation, Vermeer-like in its evocation of exact visual phenomena noted in painterly shorthand which implies more than it describes. The patterning of the ruined stone wall and vegetation beneath work respectively as zones of loose and tight pattern, the former non-directional in character, the latter directional in character (brisk as hatching in a pencil sketch). These areas impart tension and energy in what is a static composition. The cerulean against the ochre sings, with the cool hue wrapping around the block of warm earth hue. It is the great invention of the exhibition and will leave painters jealous of Inshaw’s skills as painter and composer of pictures.

Another outstanding work is Wansdyke and Landscape (2016). This is a tour de force of painterly skill. The scumbling of light ochre over burnt umber ground evokes stubble, dry grass and ripe wheat. The scumbled dyke banks form a tawny pelt – feline even. They describe the animal qualities of topography. This is similar to Degas’s monotype landscapes worked with pastel, within which the features of the landscape are made analogous to human anatomy. The combination of foliage greens, raw earth colours and cerulean sky is Inshaw’s most felicitous palette selection. It is one which accurately and plangently captures the English countryside. However, the compression and high horizon make this painting positively Balthusian, with Balthus having taken these compositional devices from Japanese landscapes in woodblock prints. The catalogue illustration does not do full justice to this painting.

Elsewhere common motifs of fireworks, tents and the chalk White Horse are represented. Paintings of birds and cats provide thematic range. There is a painting of Clyro, Wales, where the artist lived in the mid-1990s. It is recognisable to Inshaw followers by the yellow pussy willow. Dating from 1995, this is the earliest painting here, with almost all of the work coming from the last decade and particularly from the last couple of years. It is heartening that so most of the strongest paintings come from recent years, showing Inshaw to be sustaining his invention and attention. The decision to exclude paintings which feature figures prominently is a judicious one in a selection of this sacle. Some of the paintings of small size, which works well in the more enclosed gallery spaces and suggest how these paintings would appear in a domestic setting. Concentrating on the landscape – with a few of animals, trees and buildings – gives the exhibition a pleasing consistency even if it limits an appreciation of Inshaw’s full range and taste.

All of the pictures are in square format. I demure from Andrew Lambirth’s observation in the catalogue about Inshaw’s habitual use of the square format. Far from being “a shape often associated with harmony and serenity” – something which is true in a decorative context – the square is actually an unstable format, which is why it was never used by the ancients or Old Masters. The origin of the Golden Section is the knowledge that the human brain has a preference for mildly asymmetrical formats, which allows the mind to anchor itself to the dominant axis. This gives a sense of “rightness” to a type of imagery in a format of a certain ratio. Hence a vertical landscape (or a very narrow panorama) feels “off” or discordant. In a square format (also the tondo (circular) format, albeit to a lesser degree), the untethered gaze wanders and feels homeless without a dominant axis. Contrary to Lambirth, I would say that Inshaw’s use of the square format for landscape – something that Klimt pioneered – is evidence of his assertive modernity as a picture maker (along with his montage compositions).

Three large drawings of mature trees as single motifs are a departure for the artist. Inshaw has selected large sheets of paper for these and applied a light loosely brushed wash of colour to cut the glare of the brilliant white paper. Inshaw’s exhibition of drawings has been slight over recent decades even though his elaborate full-composition sketches made in preparation for his paintings on the 1970s produced many striking and satisfying drawings. Inshaw is a sensitive draughtsman, whose eye is informed by his painting experience. The modelling, dense blocks of tone, patterning and dramatic fades all come from painting. They resemble the nature studies of Caspar David Friedrich, CC Dahl and the Nazarenes, though whether or not Inshaw modelled his approach on their or simply reached a convergence independently is not clear. These tree drawings (each at 122 x 122 cm) are impressive, sustained efforts and appealing but they lack something compared to the drawings of the 1970s. An emphatic outline? Anchoring within deep pictorial space? Exactly what is missing is hard to identify and it may just be a matter of personal taste.

Inshaw turns his preferences into competencies – or vice versa. His taste for local over atmospheric (or reflected) colour works well in most of these paintings. Sunset from Silbury Hill (2019) shows Inshaw breaking from this to use atmospheric recession in an achromatic landscape. Vale of Pewsey (2019) is less effective. Whether or not the reflection on the underside of the band of cloud is was so exactly similar to the greens of the land below when Inshaw observed it, the resultant effect in the painting is unpleasant and distracting. In Dorset Snow II (2018; ex cat.), a ruddy sunset sky surmounts a dim landscape of hedges and snowclad fields composed in dull blues and charcoal. Some may find the striking dichotomy between warm sky and cool earth too strong. Could a few touches of reflected colour on the snow have leavened and harmonised the painting, even at the cost of pure realism? For whatever reasons, Inshaw’s skies of red and orange seem to work less well than the skies of cerulean or midnight blue.

Let us hope we soon have a chance to see a selection of Inshaw’s best work over his whole career in a full retrospective at a major venue. Inshaw is the only living British painter of our era working in the figurative tradition who is deserving of such attention.

To see my books and art visit www.alexanderadams.art