As part of a series of events to mark the 450th anniversary of death of Pieter Bruegel the Elder (c. 1525-1569) (including the giant exhibition currently open at the Kunsthistorisches Museum, Vienna), the Royal Museums of Fine Art of Belgium has published a wide-ranging study of two Bruegel paintings owned by the Musée des Beaux-Arts, Brussels. The two oil paintings are Winter Landscape with Skaters and Bird Trap (1565) and Census at Bethlehem (1566), paintings that were made when the artists lived in Brussels. This book is a follow-up to the excellent monograph on Bruegel’s Fall of the Rebel Angels (1562) by Tine Luk Meganck, one of the authors of the present volume. (For a discussion of that book, see my review, The Jackdaw, no. 121, May/June 2015, p.20.)

This book collects essays by art historians and historians, so we get a mixture of assessment of the paintings as art and an appreciation of the actual social circumstances of the Brabant people at the time. Anne-Laure Van Bruaene has an essay explaining the distribution, functions, taxation and regulation of taverns in Brabant. There is another essay by Erik Aerts covering the census-taking and taxes. Census and taxation go hand in hand, from Roman times to today. There are essays on politics, religion and climate data.

Overall, the interpretations of Bruegel’s paintings by the contributing art historians and historians are somewhat more benign than others. They consider Bruegel less political and his moral instruction obscure. The writers state that the complexity and ambiguity of the vignettes and the rich variety of contemporary Dutch proverbs mean that Bruegel’s intentions in these paintings is unclear. There is evident wit and didacticism about Bruegel’s tableaux but the interpretations vary so greatly that Bruegel’s political, religious and social outlooks remain only partially legible to us. Perhaps his contemporaries thought the same. 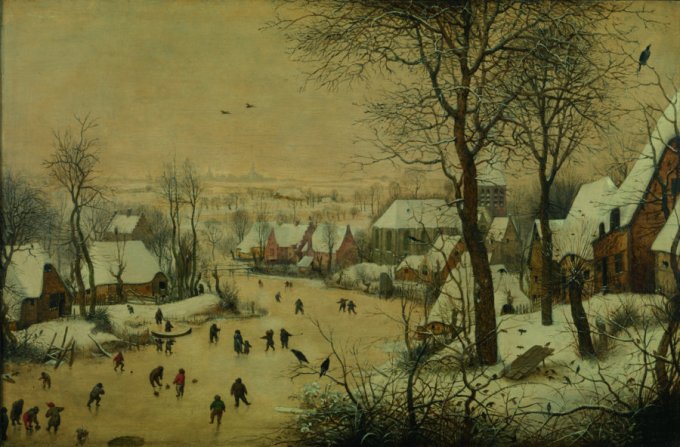 Winter Landscape with Skaters and Bird Trap (1565) shows a snow-blanketed village tableau filled with human activity: people playing golf, skating, curling stones and other undertaking other seemingly unproductive activities. On leafless branches in the foreground, birds sit. To the right in the foreground is a bird trap – an old door propped up over a scattering of crumbs. The crumbs attract birds. A cord runs from the prop to the window of a nearby house where an unseen person waits to pull away the prop in order to trap birds under the falling door. This was a common and easy way of securing bird meat in inclement weather. The authors do not mention a viable interpretation: that the setter of the trap is actually absent and thereby negligent by failing to attend to the current opportunity.

At the time Bruegel lived Europe was undergoing the Little Ice Age, so severe it caused sea ice on the North Sea coast along the Low Countries, trapping and freezing to death sailors. Writers suggest that 1564-5 was the harshest winter for many years. Was Bruegel was representing the weather of that famed season in these two paintings or recreating typical scenes derived from the traditional Book of Hours illustrations? It seems that Winter Landscape was the oil painting that popularised the winter landscape in Dutch art. While there were a few earlier paintings of snow – especially in miniature illustrations of Books of Hours – it was Bruegel’s painting which proved the keystone to the genre. The workshop of Pieter Brueghel the Younger (1564-1638) produced many of the 131 known copies of the painting.

It is a perennial question as to how realistic this painting is. Our curiosity about the life of previous times leads us to seek out documentary proof. Bruegel would certainly have understood that his paintings used aspects of the real world without believing that the best art was realistic. The consensus is that Bruegel’s art described the real and used elements from reality without ever attempting to engage in what we would classify as Realism or Naturalism. His moral landscapes are didactic and satirical but also compassionate and generous in their depiction of the peasantry. They were not real but a reflection on the real. There are comparative images of hats, skates and mittens preserved in museums, so we can assess Bruegel’s veracity.

While Winter Landscape is a painting full of space, Census at Bethlehem (1566) is the reverse. It is altogether a more complex picture, full of incident and much trickier to interpret. Mary and Joseph arrive at Bethlehem, which is not in the Levant but the Spanish South Netherlands in Bruegel’s century. Local people gather to register for a census and pay their annual taxes. The village is deep in winter and bustling. Men are carrying sacks over the frozen river, people take part in snowball fights, sledding, curling and engage in commercial activity. Payment of taxes was done by coin and goods, including grain and animals.

The characters with broad circular hats are gypsies, with descriptions so detailed and lifelike that the painter must have recalled them from life, if not from sketches made at the time. Gypsies were considered connected to the Near East and – by extension – the Holy Lands at the time of Christ. They were also considered dangerous and untrustworthy. There official proclamations in Brabant warning the populace against the interacting with gypsies and declaring that individuals who were swindled by gypsy fortune tellers had no legal recourse. In Census a gypsy steals vegetables from the garden of a leper.

Highly placed city residents with strong connections to authority seem to have been customers for Bruegel’s paintings, whereas his prints would have been affordable for merchants and artisans. The first owner of Census was Jan Vleminck Sebastiaenszoon, Lord of Wijnegem. He was a Brabantine landowner and merchant banker, described as a Catholic and royalist, which is enlightening. One line of interpretation among art historians is that Bruegel was sympathetic to Protestant peasantry’s opposition to occupation by the Spanish crown and its Catholic supporters. While there is much to support this view, this connection with Vleminck shows that Bruegel was at least on good terms with Catholic gentry, who would have had the money to purchase large panel paintings. Interestingly, Bruegel collectors Vleminck, Granvelle, Jongelinck and Ortelius were all Catholics but reformists and political moderates who urged clemency and tolerance of the Spanish. Sadly, the Spanish did not choose this course; the Duke of Alba began a campaign of terror and repression that led to war.

The census of Bethlehem is a fascinating choice for a subject as the commissioner was a tax collector himself. That meant that the very money Bruegel received for this painting came ultimately from the taxation of the peasantry. Bruegel’s view of the census is by no means as critical as it could have been. He shows the annual tax collection as a time of communal activity, including commerce and celebration connected to the mid-winter feast. So the paying taxes is both a time of loss of money and acquisition of money, an inevitable onerous burden which must be borne with fortitude, as one endures a winter or a bereavement. Likewise, the inn had a dual function; it was the place of tax collection and of drunken conviviality.

Meganck suggests that the famous Massacre of the Innocents is not the trenchant criticism of the Spanish it is discussed as. He points out that the uniforms of the officers and soldiers in the painting are dressed archaically, so viewers of Bruegel’s day would have understood the painting referred to the past rather commenting directly on the political crisis in Brabant in 1666. Meganck’s inference is that Bruegel was making a more general statement about the abuse of power and the savagery of military force unleashed upon civilians. This reading seems fair but it will be hard to shake the political anti-Spanish interpretation as the latter has the force of undiluted moral narrative and historically satisfying collocation.

The book illustrates the drawing of a farmhouse in Brabant that Bruegel included in the Census. This drawing (at the Louvre) is apparently a copy of a lost Bruegel original. The building is a farmhouse in Wijnegem that was most likely owned by Vleminck, thus including the patron’s home in the Census painting. Other drawings, prints and paintings by Bruegel show how these two featured paintings fit into his oeuvre. There are many illustrations of details which are necessary. Bruegel trained as a miniaturist and he included a lot of detail in his oil paintings. The illustrations show us incidents that we may have previously overlooked. Other images are of rare prints, illuminations and paintings by lesser-known artists help us place Bruegel’s art in a continuum of Christian devotional image making.

Technical analysis reveals a consistency in method that indicates Bruegel had no assistants, unlike his son and grandsons who had pupils and assistants. It is notable that in this book, contrary to the catalogue for the current Vienna exhibition, there is an absence of technical scientific analysis. It would have given us a broader understanding of the two paintings if we could have seen a technical description of them, which would at least tell us if they have been trimmed, restored, altered or damaged.

We are living in a time when Bruegel studies are being pushed to new levels; based on scientific analysis, new imaging technology and archival research, our understanding of one of the founders of post-renaissance painters – a critical figure in Western art – is becoming deeper and fuller. This absorbing book is a valuable part of the research. This book is warmly recommended for art historians, Bruegel fans, painters and anyone interested in 16th Century life.

One thought on “Bruegel’s Winter Landscapes”