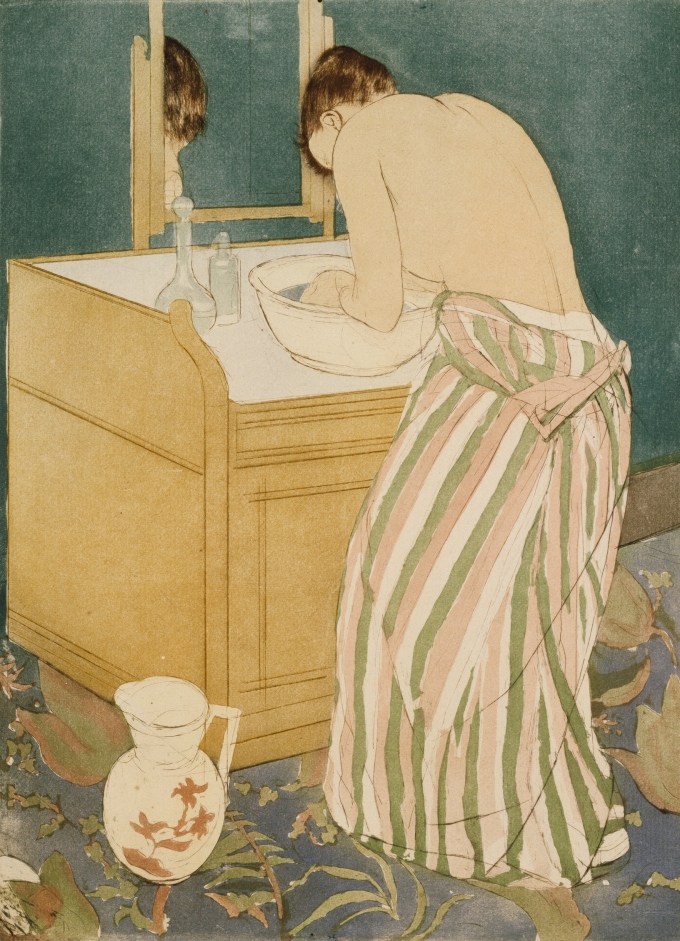 Innovative Impressions: Prints by Cassatt, Degas, and Pissarro at Philbrook Museum of Art, Tulsa, Oklahoma (9 June-9 September 2018) examines the three most prominent printmaking painters of the Impressionist movement: Mary Cassatt (1844-1926), Edgar Degas (1834-1917) and Camille Pissarro (1855-1903). The exhibition is reviewed from the catalogue.

This exhibition shows us the complex interplay of collaboration and rivalry that influenced the printmaking of three leading painters of the age. All three artists trained in etching early in their careers then set aside the medium to concentrate on painting. At the time, etching was considered a component of a rounded education for professional artists and also pursued by hobbyists, thus it was a widespread skill. In the 1860s there was a revival in etching in France, with the Société des Aquafortistes was established in 1862. Publishers encouraged artist-printmakers to produce etchings which they then marketed to fine-art collectors in competition with lithographs.

Etchings by Ludovic-Napoléon Lepic (1839-1889) show us the work of a critical figure in Nineteenth Century French printmaking. Lepic is best known for eau-forte mobile, which is the creative inking of plates that – in the case of landscape designs – adds atmosphere, changes weather and lighting conditions and can even turn day to night. This is not pure etching, wherein the plate is inked uniformly throughout an edition and which remains faithful to the etcher’s original intentions, but instead it is a hybrid of etching and monotype, with impressions varying widely. While atmospheric inking can contribute to the impact of a line etching, it can go too far and become a game or a distraction, covering up for the inadequacies of the etching. Lepic was hugely influential among artists and master printers. Lepic’s practice was enriching but also impoverishing, causing printmakers to make etchings that were deliberately incomplete or ambiguous, which allowed the application of Lepic’s eau-forte mobile technique. (Compare this to the example of filmmaking. Some directors rely so heavily on computer-generated imagery, dubbing, digital editing and post-production effects that they become slapdash in the filming and directing of actors, which is the essence of good live-action films.) There is a viable case to be made that Lepic’s influence was more deleterious than beneficial.

Another significant figure was etcher Félix Bracquemond (1833-1914). The exhibition includes three of the ten states of Bracquemond’s masterful reproductive etching of Holbein’s portrait of Erasmus. Bracquemond joined the Impressionist movement, though his art was often not close stylistically to the most common Impressionist approach. He was a brilliant technician but it is clear why he is both less known and considered more of an associate of the Impressionists than an essential member of the movement. (To read my review mentioning Marie Bracquemond, the Impressionist painter married to him, click here.)

Catalogue essays direct us to consider notions of authorship and purity in fine art.

Richard R. Brettell discusses the collaboration between Corot, Dutilleux, Grandguillaume, Desavary and the Cuvelier brothers in Arras. Together they developed the cliché-verre printing technique, producing many prints for which the authorship is shared or uncertain. This risks giving the impression that the working relationship of Cassatt, Degas and Pissarro was closer than it actually was in 1879, though Bretell’s point is taken. The Impressionists occasionally worked in in pairs and groups in painting expeditions, arranging group exhibitions and preparing the Le Jour et la nuit journal. Bretell points out that collaboration, criticism and sharing of techniques and ideas was a significant part of the careers of many artists who are commonly considered in monographic isolation. Often in the catalogue text we encounter mentions that one of the artists gave advice to another on printing or actually helped to print certain proofs. They exchanged and purchased each other’s prints.

Many critics of the era condemned the finish of Impressionist art. (The very name Impressionism came from a critic’s slur about the supposed incomplete condition of a Monet painting.) The sequential nature of printmaking means that we have a chance to consider when a work of art is finished. It also raises the issue of how much importance we attach to a work of art and how much to the creation of that art. It is very common to read in catalogues more about the preparation for, development and revision of, a work of art than about the finished work itself.

In 1879 work began on Le Jour et la nuit which was intended to be a journal featuring the prints of Cassatt, Degas, Pissarro, Bracquemond and Caillebotte, Raffaëlli, Forain and Rouart. With little accompanying text, it would have been essentially a bound version of the print portfolios of loose sheets published at the time. The journal did not appear in 1880 partly (according to a contemporary) because Degas was late with his contribution. The journal was never published but a number of etchings were prepared for it and have been identified, including Cassatt’s In the Opera Box, Degas’s Mary Cassatt at the Louvre: The Etruscan Gallery and Pissarro’s Wooded Landscape at the Hermitage, Pontoise. Pissarro’s print (based on a painting) seems to have been straightforward. Cassatt made three versions of her print in a number of states, dramatically altering the lighting using aquatint. Degas developed his print to completion then developed a second print which used the figures in different position and setting in a distinctive vertical format. This print – Mary Cassatt at the Louvre: The Paintings Gallery – was also translated into painting by the artist. It was perhaps the extended revision of the second print through 20 states that delayed Le Jour et la nuit.

Sarah Lees writes that it is likely the Le Jour et la nuit prints were exhibited at the Impressionist exhibition of 1880. “It is even more revealing that each artist chose to show more than one state of the prints, much as Bracquemond had done in 1874 with his Erasmus. In this way they not only highlighted the significance of the creative process, but also undercut notions about the primacy of the finished, final work.” She notes that it is possible to show an etching plate in different states the way it is not possible to with a unique oil painting.

The exhibition includes many prints from before and after the Le Jour et la nuit project. Some of the highlights of the selection are Cassatt’s colour aquatints. The lines are drypoint – scratches which hold ink with a characteristic emphatic blur – and the colour shading is in speckled aquatint, with sparing use of soft-ground etching. This is a rare technique. Included are the most famous Cassatt prints The Letter (1990-1) and La Toilette (1890-1). They are exquisite and justifiably praised. The influence of Japanese colour woodblock prints (exhibited in Paris in 1890) is obvious but not distractingly so. Cassatt used adventurous colouring and the editions display wide variation in colouring. Unfortunately, Cassatt’s drawing sometimes went awry and a number of her prints are irretrievably marred by obvious and painful flaws in anatomy. In such clear, sparse and (relatively) realistic works, these faults gravely damage the prints.

Pissarro also made prints in aquatint and drypoint. The results are uneven. The weather in Rain Effect (1879) was an afterthought. The torrential rain makes the scene of two figures sitting and standing in a field seem ridiculous. Woman Emptying a Wheelbarrow (1880) is a lot better and may have been destined for Le Jour et la nuit. 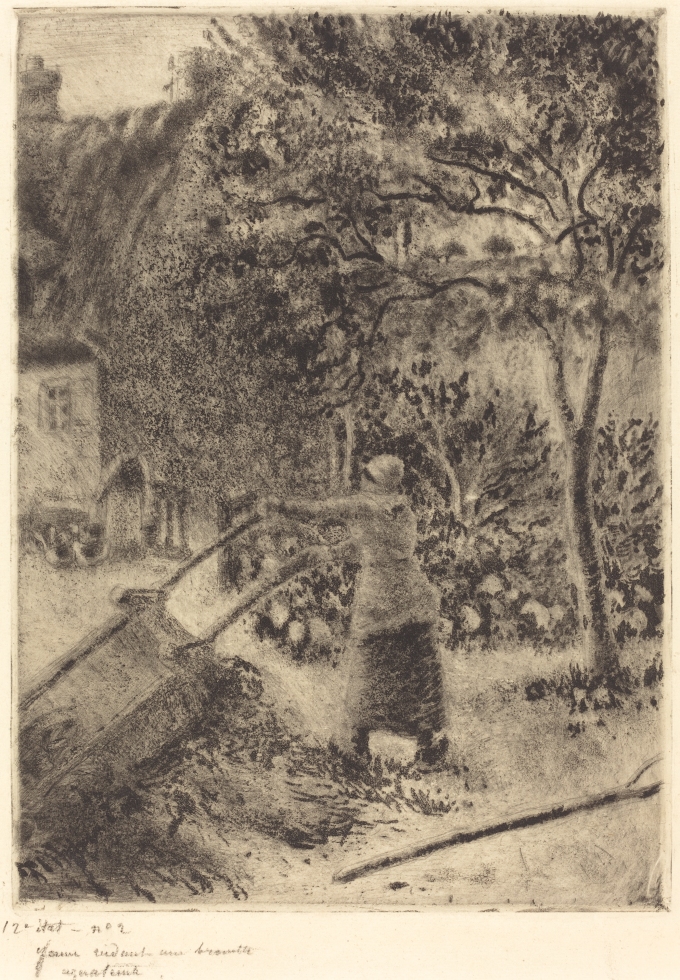 Pissarro and Degas experimented by proofing Pissarro’s Twilight with Haystacks (1879) in different colours. Examples in black, red and blue are reproduced in the catalogue. Degas preferred to add colour to his prints in pastel and paint, using the print (or counterproof) as the framework for a unique work of art. Included in the exhibition are three rare landscape monotypes that Degas made by painting dilute colour oil paint on a metal plate and running this through a press with paper. The exhibition also includes some monotypes of bathing nudes and brothel scenes.

Pissarro is not well known as a printmaker and his contributions are uneven. The colour etchings and monotypes from the 1890s of peasants and landscapes verge on the crude. The use of heavy outlines (perhaps derived from Cloissonisme) is unpleasant and works against the artist’s long experience in building forms in colour without drawn outlines. The overpowering outlines and casual draughtsmanship, combined with the unpleasant effects of oil on paper, have produced rather ugly prints. A late lithograph in monochrome is very good. The loose wash effects and emphatic shadow create drama and solidity that seem close to Romantic art or the wash drawings of Poussin.

It is heartening to encounter such a scrupulously researched art-historical exhibition, especially regarding prints, a medium often passed over as minor. Particular commendation is due for the meticulous cataloguing of technical data (including plate and paper size) and provenance, information which is often lacking in exhibition catalogues.