Bacon – Giacometti, Fondation Beyeler, Basel (29 April-2 September 2018) examines the bonds between Francis Bacon (1909-1992) and Alberto Giacometti (1901-1966). The two artists were near contemporaries – though Bacon was a late starter and so considered much more junior than the actual eight years between them – and shared social, intellectual and artistic connections. Bacon – usually so guarded in his compliments – was notably and publicly respectful of Giacometti. Giacometti was also an admirer of Bacon. This exhibition is reviewed from the catalogue.

When Bacon was emerging as a mature artist in the late 1940s, Giacometti was re-emerged from a prolonged retreat from the public art world. He had been a leading figure in the Surrealist movement in the early 1930s but by the late 1930s had left the movement. During the war he was isolated in Switzerland, working on figures that were allied to realism – or at least observation. In a series of photographs of Giacometti’s Paris studio published from 1946 onwards, the public became acquainted with an artist newly devoted to depicting the figure and his art. The startlingly primitive conditions of the studio were notably photogenic and the image of the artist in crumpled tweed suits, cigarette in mouth, hands working on a clay model, proved to be totemic. For a young artist seeking to be taken seriously, Giacometti’s art and life became a template. Exactly how much of the example of Giacometti was adopted consciously by Bacon – and how much simply coincided with Bacon’s pre-existing attitudes – is an open question, on that this exhibition and catalogue examine.

Both artists were influenced by Surrealism but rejected it as a doctrine. Both were committed to depicting observed figures in new ways. Both were artists of habit and routine. They had relatively little engagement with landscape. They were out of step with art of their time. Both artists were admirers of Egyptian sculpture. The many statements by Giacometti about Egyptian art, and reviews discussing this connection, may have led Bacon to investigate Egyptian art more deeply in the late 1940s and early 1950s. Bacon stated outright in later interviews that he preferred Egyptian carvings to any other sculpture.

The pair became acquaintances in the 1950s and friends in the 1960s. Among their common acquaintances were writer Michel Leiris, critic David Sylvester, dealer Ernst Beyeler and collectors Robert and Lisa Sainsbury. The catalogue includes photographs taken by Graham Keen of Bacon visiting Giacometti as he set up his exhibition at the Tate Gallery on the 13th of July 1965. They met infrequently in London and Paris. In a catalogue essay, biographer Michael Peppiatt points out that friendship could have deepened further, as Bacon spent increasing amounts of time in Paris in the late 1960s and 1970s. 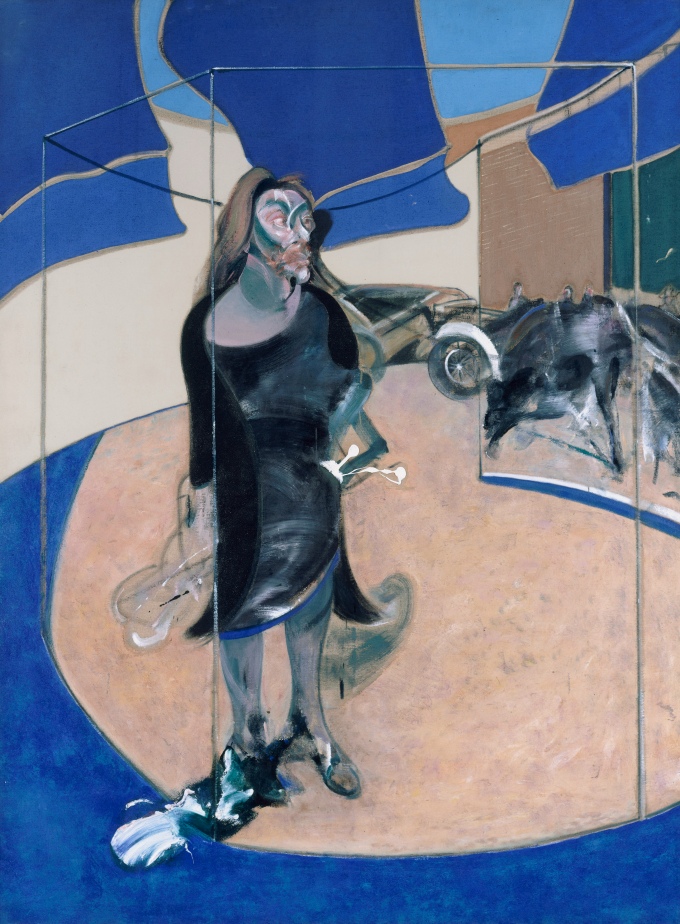 Both artists tended to work with portrait subjects they knew personally and tended to reject commissions. Though known for their portraits, they declined to use the demand for their ability to be used to portray subjects who could afford to pay for commissioned paintings. Isabel Rawsthorne (1912-1992) modelled for Giacometti and Derain in the 1930s and later, when she lived in London, she modelled for Bacon. Drawings and sculptures of Rawsthorne made by Giacometti in the late 1936-48 are displayed alongside Bacon’s small portrait paintings and the large full-figure portrait on canvas, loaned from the Nationalgalerie, Berlin. She became one of Bacon’s most significant models during the 1960s-1990s. She became an artist in her own right and exhibited at the Marlborough Gallery, London, Bacon’s dealer.

Giacometti’s use of cuboid frames around his sculptures was initially pragmatic, allowing him to suspend objects in space. Consider Boule suspendue (1930) and La Nez (1947). Later, the frame became a formal device in tableaux (for example, La Cage (1950-1)). The space frames were then introduced into Giacometti’s paintings. In the paintings and drawings they situate the figure in space as well as on the picture plane. They would directly inspire Bacon to adopt the device by 1947 in his own painting. It became one of his most persistent aspects of his art.

The cult of genius that sprang up around Giacometti was pervasive, certainly in the art world before Giacometti became a household name after his death. The example of a determined artist living in near squalid conditions in pursuit of his art – but who was a noted bon vivant and frequenter of public bars, cafés and clubs – was something that accorded with Bacon’s personal inclination to hard work in Spartan conditions and high living in public. Like Bacon, Giacometti was also a former Surrealist who had been rejected by the movement and sought a new direction. He was a defiantly figurative artist at a time when abstraction – especially from America – was ascendant.

The generously sized catalogue has full-page illustrations, which is particularly good for the unique painted Giacometti plasters. It is unfortunate that casting dates for the Giacometti bronzes are not given in the list of details, as this clarifies whether the artist oversaw the production and patination. The selection of works is adroit, with works taken from the Beyeler Foundation and loans from around the world, including triptychs by Bacon.

The co-operation of the Fondation Giacometti, Paris has allowed delicate unique plasters to travel to Switzerland. Giacometti embellished plasters with touches of paint and pencil lines. These have different qualities to the better known bronzes. The plasters have different coloration and the air of great fragility. The Francis Bacon MB Art Foundation, Monaco also loaned material for the exhibition.

Some of the art is the very best made by the artists. By Bacon there is the uncanny Head III (1949), the fine recovered Study of Velázquez (1950) and Figure with Meat (1954) with its richly coloured sides of beef, which has travelled from Chicago. The Study for Bullfight No. 2 (1969) is very effective in fusing the bullfight with a crowd from a Nazi rally. The analogy between these two group spectacles of primal anger, fear and catharsis is an intelligent one. The 1967 triptych showing two homosexual couplings flanking a crime scene is one of Bacon’s lush and visually satisfying paintings. The more austere triptych of 1972 includes a rare example of dry-brushing, where Bacon has applied paint in a rough veil over background elements. In Memory of George Dyer (1971) is a weak triptych. Whatever the strength of the emotions Bacon experienced in relation to the death of his lover Dyer, those did not translate into paint here. The triptych depicting Dyer’s death is much more powerful.

Giacometti’s pieces include busts of Annette, Diego, and Eli Lotar, some of them the original plasters of the artist’s last busts. There are versions of walking men and standing figures, including the Women of Venice. Grande tête mince (1954) has Diego Giacometti’s head reduced to the narrowness of a blade or flint arrowhead, while retaining the essence of the subject’s humanity. It does not appear freakish at all. La Nez (1947) is a strange piece, expressing a profound sense of horror and angst. The extended nose does not seem an affectation; it is less a distortion than visual expression of abnormality and distress.

Some pairings are questionable. Trois hommes qui marchent (petit plateau) (1948) is reproduced opposite Bacon’s Marching Figures (c. 1952). The former seems a study of random encounters in an urban setting, while the latter is probably derived from a photograph of marching soldiers. Most of the comparisons are apt and informative. There is single serious and inexplicable omission to the selection.  Head (of a Man on a Rod) (1947) is a key work of a head crying out, related to a traumatic memory Giacometti had of witnessing a man die. It is close in character to Bacon’s figures screaming, many of which are included. Head exists in numerous casts and would have been difficult to borrow for an exhibition of this quality.

The catalogue essays, illustrations and artist biographies allow people to track the parallels (and differences) between two of the most important figurative artists of the Late Modern period.