“YouTube comedian Mark Meechan has been convicted of grossly offensive behaviour under the Communications Act. Meechan’s crime was filming his girlfriend’s dog raising its paw as he made pro-Nazi comments. Under the YouTube username of ‘Count Dankula’, he posted this joke video on the internet, and it was then viewed over three million times. This week, Airdrie Sheriff Court found Meechan guilty, and he now faces potential imprisonment.

“Talking to the press after the judgement, Meechan said ‘today, context and intent were completely disregarded’. He explained during the trial that he was not a Nazi and that he had posted the video to annoy his girlfriend. Sheriff Derek O’Carroll declared the video ‘anti-Semitic and racist’ in nature. He added that ‘the accused knew that the material was offensive and knew why it was offensive’. The original investigation was launched following zero complaints from the public. Offensiveness apparently depends on the sensitivity of police officers and judges.

“Offensive behaviour is one of the crimes of immorality, such as offence against public morality, action against the state, counter-revolutionary activity and other catch-all terms, that have always been used to suppress dissent (reasonable and unreasonable)…” 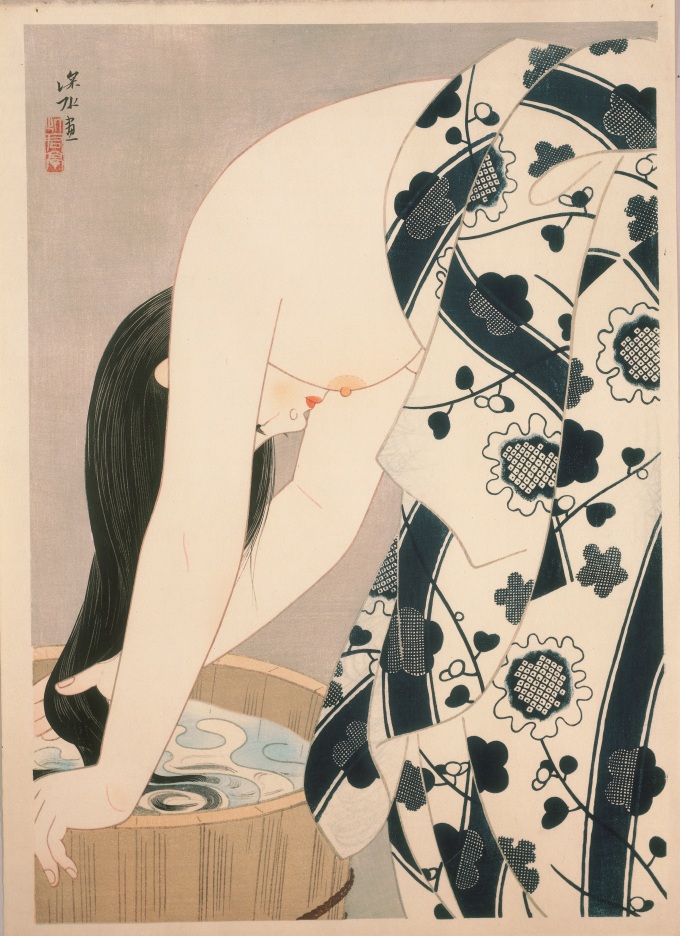 The opening up of Japan to the West in 1868 and the drive to modernise and industrialise presented Japanese artists with serious questions. How could Japanese art stay truly Japanese in the face of Western art and technology? Would modernity rob Japanese culture of vital aspects? Could an artist be both Japanese and modern or was that an inherent contradiction?

Japanese society was changing rapidly and the arts reflected that. While japonisme became the fashion in the West, Japan was adjusting to incorporate Western influence. Shin hanga (new prints) was an element of the traditional nihonga (Japanese-style painting) movement, which was set up in opposition to the sōsaku hanga (creative prints) part of yōga (Western-style painting). Nihonga commenced as an official tendency in 1890 expressly to counter Western influence in culture. Shin hanga was promoted by publishers as a revival of the traditional ukiyo-e school and used traditional woodblock-printing methods and division of labour. At this time many of the skills of the ukiyo-e (Edo period) printmakers were dying out as new technology (such as lithography) were rendering the labour-intensive woodblock printing process outmoded. Shin hanga was an attempt to capitalise on the Western demand for Japanese prints, by effectively reviving the tradition of ukiyo-e, but it was also popular among the Japanese. The traditional subjects had a nostalgic appeal and presented Japan in idealised form at a time when daily life was becoming divorced from the rural routine of life.

The exhibition Itō Shinsui: Tradition and Modernity, Fundació Joan Miró, Barcelona (1 March-20 May 2018) presents the art of one of the most renowned shin hanga printmakers, Itō Shinsui (1898-1972). Joan Miró visited Japan and was influenced by East Asian art – and his art was popular in Japan – so it is only fitting that this survey as a modern Japanese master is presented at his foundation in Barcelona.

Shinsui was trained by Kaburagi Kiyokata (1878-1972). Shinsui, who trained as a painter, made his first print Before the Mirror (1916) aged 18. It was the epitome of the approach and subject matter that would come to dominate the 147 prints he designed: the young beautiful woman, seen in a moment of private reflection, depicted with clarity, elegance and refinement. Although Shinsui’s subjects were traditional, he was not an avowed traditionalist in his style. The unusual and innovative compositions and colour choices make his art distinct from the masters of the ukiyo-e. Close-ups and angles make his work distinct. His decision to leave some marks of the baren (printing paddle) used to rub the paper over the inked block distinguishes his prints from the smooth inking of the ukiyo-e printers. At first glance, this makes his prints look like lithographs, with the crayon marks visible. Could this decision be related to the late Nineteenth Century French practice of heavy inking of etching plates? In this way printers and artists could make impressions unique by varying the inking to highlight certain qualities. Before the Snow (1926) seems to employ a patterned embossing on the woman’s fur collar but this goes unremarked upon in the catalogue.

The trilingual catalogue is published by the Taiyo no Hikari Foundation, Japan, lender of the 100 prints exhibited in Barcelona. It is an attractive book, with Japanese-paper flyleaves. It includes discussions of Shinsui’s art, handsome illustrations and a chronology of the artist’s life. A section covers the process of Japanese woodblock printmaking. The only absence is a discussion of how Shinsui’s printmaking relates to his painting. However, for Westerners unfamiliar with even the best known of Shinsui’s paintings, that would have required too much space. It is disappointing that the page gutter bisects two-page illustrations. Illustrations should never be placed over two pages. Otherwise the catalogue is faultless.

The women have the pallid skin colour typical of Japanese conventions of beauty, with slight rosy flushes on the cheeks and nipples. Faces are stylised. Clothing is generally traditional, featuring the flowing robes, sashes and printed fabrics with bold designs typical of the Edo period. In some prints Shinsui presents modern Japanese women in Western clothes: in berets, skirts and neckties, with hair short, curled or parted. In one print he showed a woman next to a Western clock. Although Shinsui advocated for the portrayals of life to include elements that were characteristic of the period – as a form of historical record – his own practice erred strongly in favour of the showing scenes typical of the past periods. In perhaps only the slightest detail do some of the prints show us the reality of Twentieth century Japan.

In Shinsui’s prints we find the crisp lines and strong patterns we would expect. Typical to Japanese prints are areas of pattern, such as blinds, walls, waves, raindrops and printed fabrics. In a handful of prints the style is Western, following the current styles of colour illustration that were widely available in Japan. These are the least successful prints. Midday in a Summer Resort (1941) is an example. The generic colour scheme, cartoon-style abbreviations and the deep and cluttered pictorial field all go against the strengths of shin hanga and Shinsui’s style. Shinsui’s printmaking evolved relatively little in terms of style, though his subjects varied over the different series he made.

Many landscape prints are included in the exhibition. They are rural scenes in the main: a hut in a snowy mountains, a river bridge in the rain, a coastal view, fields below mountains. These are conventional subjects. The images were drawn from personal observation rather than ideal fabrications or variations upon existing archetypes. The dramatic tonal range and juxtapositions of strong colours distinguish Shinsui’s landscapes.

This excellent book is the most comprehensive book in English on the artist and would make an essential addition to any library covering Japanese art.

The catalogue Giacometti was published for the retrospective exhibition at Tate Modern (10 May-10 September 2017). The selection is representative and many excellent pieces are included. There are early works: the plaster and stone portrait heads, post-Cubist plaster carvings and marble carvings influenced by Cycladic art.

Around 1928 Giacometti formulated his Surrealist style, which combined his sensibility for plastic form with a sense of drama. Using combinations of multiple materials, the artist created violent, unsettling and mysterious psycho-sexual dramas…”